Hat of the Priest: Nutritional Properties, Role in Diet and How to Cook by R.Borgacci

What is a priest's hat?

Cappello del prete is a name used to indicate products of the same fundamental group of foods, totally different as regards their nutritional properties, but similar for the typical triangular or tricornuta shape. With the cap word of the priest, therefore, we could identify:

Sources of high biological value proteins, vitamins - especially of the B group - and specific minerals - mainly bioavailable iron, phosphorus and zinc - both types of priest's hat belong to the first fundamental food group. Like all meats, they are also a natural source of cholesterol, saturated fatty acids - globally in equal or even lower amounts than unsaturated, although the ratio may change depending on the case - of purines and amino acid phenylalanine - contraindicated for hypersensitive subjects but harmless for healthy people. They do not have a particularly high digestibility. The portion and frequency of consumption of the anatomical cut and the sausage are different from each other. In the first case it is superimposable to that of all fresh meat, in the second - due to the possible presence of fat contained in the covering skin - it is lower.

In the kitchen, both types of priest's hat are used to prepare second courses; this does not mean that they can constitute excellent quality ingredients for selected minced destined for sauces and fillings. The priest's hat is considered a low quality cut. Rich in collagen, it is only suitable for prolonged cooking and absolutely not for crudités or blood preparations. The shoulder and the cup are normally used in cooking "pulled pork", a typically American recipe that can be reproduced on the barbecue as well as in the oven. It is one of the most suitable pieces for braised beef. Boiled, that of bovine is part of the official recipe of Piedmontese mixed boiled meat and is widely used to prepare meat broth.

The fresh cut of the priest's hat has a moderate cost; the sausage, on the other hand, is more expensive due to the processing it requires. However, as with all products, this characteristic depends above all on: the subspecies or the animal breed, sex, age, breeding etc.

Nutritional properties of the priest's hat

Considerable in the first fundamental group, both types of priest's hat are foods rich in high biological value proteins, specific vitamins and minerals. They have an average energy intake in the case of the anatomical cut and higher as regards the sausage.

Calories are supplied mainly by proteins and lipids - higher in pork sausages - while carbohydrates are absent. Peptides have a high biological value, that is they contain all the essential amino acids in the right quantities and proportions with respect to the human model. The fatty acids are mainly unsaturated, especially monounsaturated, followed almost equally by the saturated; the polyunsaturated fats, consisting predominantly of omega 6, are the least significant fat portion.

Cholesterol is present in significant quantities, especially in pork sausage, while in beef muscle it could be defined in line with those of the muscle meat category - therefore decidedly inferior to egg yolk, to shellfish, to certain molluscs, to offal etc. Both types of priest's hat do not contain dietary fiber, gluten and lactose; the pork sausage can mature a certain concentration of histamine. Instead they have significant amounts of purines and phenylalanine amino acids.

From the vitamin point of view, these are foods in line with the products belonging to the same category. In relation to our nutritional needs, they mainly contain water-soluble vitamins of group B, such as niacin (vit PP), pyridoxine (vit B6) and cobalamin (vit B12); the others of group B - thiamine (B1), riboflavin (B2), pantothenic acid (vit B5), biotin (vit H) - ascorbic acid (vitamin C) and all the liposoluble (vit A, vit D, vit E, vit K).

Also with regard to mineral salts, the two types of priest's hat do not stray too far from the group to which they belong. The content of iron is good, but also of zinc and phosphorus; also bring potassium.

Priest's hat in the diet

The anatomical cut of the priest's hat can be inserted in most dietary regimes. If obtained from a young animal, then lean, without the addition of condiments and well trimmed from fat - from animals of average age, therefore not mature - it could also be used in the diet of certain clinical conditions such as severe overweight and hypercholesterolemia - although it would be advisable to prefer lean meats such as chicken, turkey, horse breast, lean fish, etc. The pork sausage instead, being covered with a rind to which a certain layer of fat is maintained, is to be avoided in the case of a low-calorie normolipid diet.

Both should not be included in the diet too frequently and systematically, as they have to alternate with other foods of the same nutritional task: other meats (game, offal, poultry), fishery products (finfishes, crustaceans, molluscs) and eggs.

Rich in high biological value proteins, they are very useful in the diet of those who have a greater need for all essential amino acids; for example: pregnancy and lactation, growth, extremely intense and / or prolonged sports, old age - due to an eating disorder and a tendency to geriatric malabsorption - pathological malabsorption, recovery from specific or generalized malnutrition, debasement etc.

By virtue of the reasonable content of cholesterol and the acceptable percentage of saturated fats, the anatomical cut of the priest's hat can be used in the diet against hypercholesterolemia, provided that the portion and frequency of consumption are acceptable. Note : in food therapy against dyslipidemia it is however less appropriate than fish - pinnutes properly called - rich in omega 3 (EPA and DHA). Pork sausage instead, being richer, should be avoided. They are neutral foods for people suffering from hyperglycemia and / or type 2 diabetes mellitus, hypertriglyceridemia and primary arterial hypertension.

Like the other meats, the two types of the priest's hat are to be avoided or moderated in the case of severe hyperuricemia - a tendency to gout - and calculosis or renal lithiasis with uric acid crystals; should be completely excluded from the phenylketonuria diet. They do not show contraindications for lactose intolerance and for celiac disease; they should also be harmless for histamine intolerance. Both the anatomical cut and the sausage are appreciable sources of bioavailable iron and participate in the coverage of the metabolic needs, higher in fertile, pregnant women, marathon runners and vegetarians - especially in vegans. Note : iron deficiency can lead to iron deficiency anemia. They contribute to satisfying the phosphorus requirement, a mineral very common in food but nevertheless abundant in the body - in particular in the bones in the form of hydroxyapatite, in the phospholipids of cell membranes and in nervous tissue, etc. The zinc content - essential for hormone production and antioxidant enzymes - is more than appreciable. Essential sources of potassium are not to be considered, but they still participate in satisfying the organism's request - greater in case of increased sweating, for example in sports, increased diuresis and diarrhea; the lack of this alkalizing ion - fundamental for the membrane potential and very useful in the fight against primary arterial hypertension - induces, especially related to lack of magnesium and dehydration, the onset of muscle cramps and general weakness.

The two types of priest's hat are rich in B vitamins, coenzyme factors of great importance in cellular processes. They can therefore be considered an excellent support for the functioning of the various body tissues.

They are not allowed in the vegetarian and vegan diet; are inadequate for Hindu and Buddhist food. Pork sausage is not a kosher or halal food.

After total cooking, they are also allowed in the diet during pregnancy. The average portion of the anatomical cut is about 100-150 g; that of the sausage equal to or less than 100 g.

The anatomical cut of the priest's hat lends itself mainly to the preparation of second courses. Along with other pieces of secondary value, such as fresh ham, it is often used for minced meat destined for burgers, meatballs, ragout, various fillings, etc.

Due to the consistency of the meat, tenacious and compact, it should not be eaten raw. On the contrary, it requires slow and prolonged cooking, indispensable for collagen dissolving. The methods of heat transmission best suited for cooking the priest's hat are mixed:

The recommended temperatures are medium and generally long; for example, to cook a cut of a couple of kilograms, the oven could be set at 140 ° C for about 3-4 hours, so that the meat - suitably covered - progressively reaches 95 ° C in the heart and thus dissolves the collagen without drying out. When cooking a smaller roast instead - no more than one kilogram - you could take advantage of higher temperatures (170-190 ° C) and lower times (about 60 ').

The most used cooking techniques or systems are: brazing, stewing, indirect cooking in the American barbecue and possibly in the oven, boiled in water.

The most famous Italian recipes based on the cow's priest's hat are: mixed Piedmontese meat boiled, larded roast and braised beef. It is also an ingredient for meat broth.

The hat of the bagged priest - of pork - is a preparation aimed at itself. It requires a preliminary soak to soften the outer rind. Subsequently it will be cooked in the same way as cotechino, pot salami, salama da sugo ferrarese and zampone; dipped in cold water, it must reach a boil and keep it for the time necessary to partially dissolve collagen - about 3 hours.

It goes mainly with stewed lentils, mashed potatoes and various kinds of sauces such as the horseradish sauce or the green sauce.

Description of the priest's hat

The priest's hat is also called shoulder or more precisely shoulder pulp. In cattle, as much as in the pig, it has a more or less triangular - trapezoidal shape, and consists mainly of the muscles that move the scapula.

In English, the pork is derived from a piece called "boston butt" while the beef from the anatomical region "chuck and blade".

Tingling in the right hand 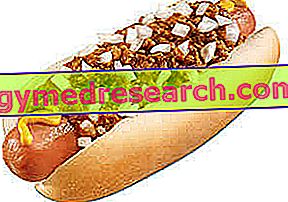