Grapeseeds are small seeds contained in grape berries ( Vitis vinifera ). Each grape contains from one to four pips, in turn custodians of considerable quantities of oil (15-16%).

By-product of the wine industry, grapeseed oil is appreciated both in the cosmetic and dietary - food sectors. Its main nutritional characteristic is linked to the high content of linoleic acid, an essential fatty acid founder of the omega-six series. Despite being rich in phenolic antioxidant compounds, which are also health friendly, grapeseed oil alters with heat and should be used preferably raw. To avoid early rancidity it is necessary to keep it in a cool place, away from light and heat sources. On the market, however, refined grapeseed oils are found with an extremely high smoke point, a characteristic that makes them suitable also for long cooking dishes. Unfortunately, if on one side it raises the resistance to high temperatures, on the other hand the refining reduces the quantity of antioxidant substances present in the food.

Grape seed oil is attributed to cholesterol-lowering properties . In fact, omega-6 fatty acids have proven effective in reducing blood cholesterol, lowering the plasma levels of the good HDL fraction and the bad LDL fraction. The wealth of antioxidants contributes to enhancing its protective properties on the health of the cardiovascular system, provided, however, that it is consumed in small doses, both to avoid taking too many calories (the consequent overweight would nullify all the virtues), and not to exceed with the supply of omega-six (which, when not adequately compensated by a diet rich in fish or other sources of omega-3, promote the production of bad eicosanoids).

The content in vitamin E is modest compared to that of other vegetable oils, such as wheat germ oil, corn oil, soy oil or sunflower oil. The lack of the antioxidant effect of this vitamin is however largely compensated by the richness in polyphenols, a peculiar and almost exclusive characteristic of grapeseed oil.

Also in the cosmetic field the antioxidant action is exploited, which protects the skin from premature aging, from atmospheric agents and free radicals. Grape seed oil applied to the skin also has astringent, firming and stimulating properties on capillary microcirculation.

Below is the nutritional composition declared on the label of a commercial grape seed oil, comparing it with that of an extra virgin olive oil of the same brand. 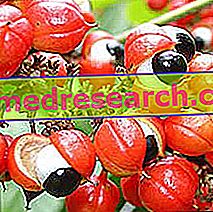 Guarana in Herbalist: Property of Guarana