Category health of the nervous system Neurovegetative dystonia Among the generalized dystonias, some peculiar neurological syndromes stand out, characterized by muscular contractions and involuntary spasms of the extrapyramidal system: the disorder in question is known as neurovegetative or, more commonly, paroxysmal dystonia. Considering this syndrome as a mere "dystonia" can sometimes be reductive, considering that in this group of kinetic disorders there are also atetosis, chorea, ballism and cerebellar tremors, involuntary and uncontrolled movements of the musculature falling into the category of dyskinesias 2019
What is dysesthesia Dysestesia is a noun that derives from the Greek words "dis", which means "abnormal" and "aesthesis", meaning "sensation"; the meaning of dysesthesia is "abnormal sensation". It is an anomaly of the tactile sense, frequently characterized by marked unpleasantness
Read More

2019
What is cleft? Schisi is synonymous with SPACE ; with cleft it is usual to indicate a type of tissue cracking genetically determined or otherwise influenced by familiarity; during embryonic development, those affected by cleft do not reach the continuity of one or more areas or segments that appear therefore interrupted and / or incomplete due to the lack of fusion of the two tissue heads
Read More

Aphasia in brief: Summary on aphasia

2019
Summary on aphasia Scroll down the page to read the summary table on aphasia. Aphasia Aphasia: language deficiency, usually due to cerebral pathologies. Aphasia identifies an alteration in the ability to understand and use both words and verbal expressions Aphasia: incidence 150, 000 patients with aphasia in Italy Affects 40% of stroke patients in the left hemisphere 20, 000 new cases every year Aphasia: etymologies and meaning of the term Literal translation : aphasia derives from the Greek ἀφασία, meaning mutism Meaning : an aphasic patient is not always "one who does not speak", bu
Read More 2019
Aphasia: treatable disease? Fortunately, aphasia is a curable disease for many patients: however, each individual responds in a subjective way to therapies, since the language disorder, as we have seen in the previous articles, can occur through many facets. Consequently, it is not possible to accurately estimate the timing of healing from aphasia: the duration of the therapeutic cycle depends on the subject, the age of the patient, the cause that caused the aphasia and the chosen therapeutic option
Read More

Agnosia in brief: Summary on agnosia

2019
Agnosia: summary Scroll down the page to read the agnosia summary table. Agnosia Sensory perception of a sensory, tactile, visual and / or acoustic nature: the subject is unable to recognize and identify a given object, perfume, form, person or entity Agnosia: etymology of the term The term agnosia derives from the Greek a-gnosis , which literally means not knowing Agnosia: causes Agnosia is directly related to brain injury Agnosia appercettiva Impairment of the patient's perceptive functionality: Transformational agnosia Agnosia by form Integrative agnosia Associative Agnosia The patient i
Read More 2019
Aphasia: definition The term "aphasia" includes a heterogeneous and multiform group of language deficits, usually consequent to cerebral pathologies: in general, aphasia identifies an alteration of the ability to understand and use both words and verbal expressions. In other words, aphasic patients are not able to transform their thoughts into words
Read More 2019
Aphasia: definition Aphasia is the title of the chapter concerning language disorders, basically related to the articulation and understanding of words: it is an acquired disorder, that is to say consequent to a trauma related to the cerebral hemisphere that coordinates the language. In the introductory article we have analyzed the general picture of aphasia: in this discussion the various forms of aphasia will be examined
Read More 2019
Definition of Agnosia In the absence of memory deficits and sensory systems lesions, agnosia is a tactile, visual and / or acoustic perception of a sensory discriminatory nature. In simple words, we speak of agnosia when the subject is unable to recognize and identify a given object, perfume, form, person or entity, despite maintaining its perceptive capacity unchanged
Read More 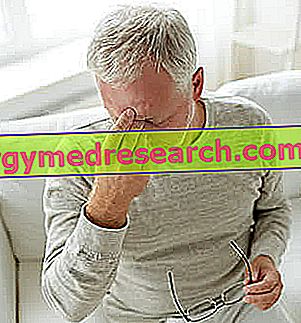 2019
Generality Dissociative amnesia is a disorder characterized by a loss of retrospective memory , linked to disturbing events from a physical and emotional point of view. This manifestation represents a defense mechanism implemented in an unconscious way to protect one's mental balance. Among the triggering events can be traumatic or highly stressful experiences directly suffered or witnessed (sexual abuse, murders, natural disasters, abandonment, financial problems, etc
Read More 2019
What is apraxia? In the absence of elementary neurological lesions of motor or sensory nature, we speak of apraxia when the subject shows an evident difficulty or inability to perform voluntary movements. More precisely, apraxia is a neuropsychological disorder directly related to movement deficits, both in terms of planning and motor programming: in other words, the apraxis patient is not able to perform precise gestures ( meaningful movements ) and / or meaningless voluntary movements
Read More