Panissa is the name used to indicate even very different recipes; in particular, it is necessary to distinguish above all two types of culinary preparations:

Piedmont panissa is a typical dish of Vercelli, but also widespread in many provinces of the Lombardy region (especially Lodi and Pavia). In the different territories it is produced in slightly different types; note is, for example, the "paniscia" of Novara. The festival of panissa takes place in August in Vercelli, traditionally in the courtyard of the Mazzini Gym.

The main ingredient and cooking method are the same as for risottos, but it is not inconceivable that panissa was originally cooked using less valuable cereals such as millet.

In Lombardy, the panissa does not require the use of beans, but it requires the addition of grana cheese (graniglio lodigiano).

Ligurian panissa is a typical recipe of the Liguria region, quite different from the Piedmontese and Lombard dish of the same name. It is in fact more similar to chickpea flour, it does not include the use of extra virgin olive oil in the dough and is cooked in a pot. NB : In Spain there is an almost homonymous dish called paniza (same name of an Iberian municipality of Aragon, even if the correlation is not known).

It is a fried fish prepared with wheat flour and chickpeas (4: 1 ratio) in which are also added slices of fried dough identical to those in Liguria.

That of Piedmontese and Lombard panissa is a fairly energetic recipe.

By replacing the oil or butter with lard or salami, a percentage of lipids similar to that of a common risotto is obtained; moreover, the presence of beans contributes to further reducing the density of caloric nutrients, increasing the quantity of fiber.

The energy of Piedmontese and Lombard panissa is provided above all by carbohydrates, followed by lipids and finally by proteins.

Carbohydrates are mainly complex (starch), monounsaturated fatty acids (if the pig is light and farmed) or saturated (if the pork is heavy and "homemade"). Peptides are of high biological value, as they come from both meat and beans / rice association.

Cholesterol is more than relevant.

As far as vitamins are concerned, thiamine (B1) and niacin (PP) prevail, although visible in medium quantities. Analyzing the minerals, discrete concentrations of potassium, slightly bioavailable iron and calcium are observed (especially in the recipe with grana).

Piedmontese and Lombard panissa can be used in almost all diets, except those for the clinical nutrition of large obese people and those suffering from severe metabolic disorders.

It is not tolerated by vegan and vegetarian philosophy.

It lends itself to the diet of celiac and lactose intolerant (if it does not contain cheese).

Ligurian panissa is a fairly healthy food, with a moderate caloric intake mainly provided by carbohydrates, followed by lipids (if it is seasoned or fried before consumption) and finally by proteins.

Fibers are abundant and cholesterol is absent.

Regarding vitamins, good amounts of thiamine (B1), niacin (PP) and retinol equivalent (A) are observed. As far as minerals are concerned, there are moderate concentrations of potassium, slightly bioavailable iron, calcium and phosphorus.

Ligurian panissa lends itself to any diet, but it is advisable to reduce portions in case of hyperglycemia, type 2 diabetes mellitus and hypertriglyceridemia.

It is tolerated by vegetarian and vegan philosophy.

It lends itself to the diet of celiac and lactose intolerant. 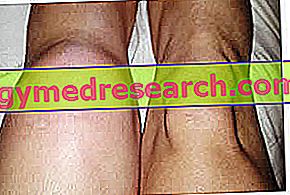 Water in the knee - Spill to the knee